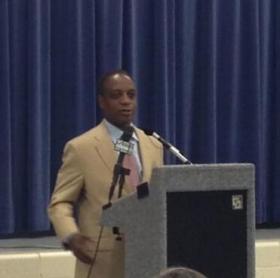 The DeKalb County school board has to approve a budget for the upcoming year by the end of next month.  Although the district was expected to be millions of dollars in debt, officials now say there’s a surplus.

DeKalb County Interim Superintendent Michael Thurmond’s budget proposal projects a $12 million  surplus. Mark Elgart is the head of the district’s accrediting agency. After giving the commencement address to Druid Hills High School last week, Elgart said the district is discovering some of the failures of its past financial management.

“Time will tell whether there’s accuracy in their assessment of what they have,” Elgart said, “But, more importantly, how are they going to use that to help students?”

Thurmond says the surplus is partly due to a big reduction in legal fees. But, he says, he’s not counting his chickens.

“It’s called a surplus, yes,” Thurmond says, “But in my mind, technically speaking, we won’t have a surplus until we have a Rainy Day Fund of about $50 million. The good news, though, is that we will have money in the next fiscal year to invest in academic achievement and career readiness.”

Thurmond wants to use some of the money to eliminate a teacher furlough day. The district is trying to regain full accreditation after being placed on probation in December.