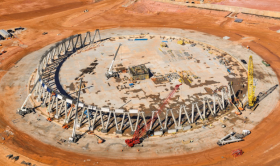 For the first time, Georgia Power officials are acknowledging the nuclear expansion project at Plant Vogtle will cost a lot more and take a lot longer than originally estimated. Company officials say the project is more than $700 million over budget and 19 months behind schedule.

Given those figures don’t include hundreds of millions in other potential cost-overruns, it’s a troubling sign for Georgia Power ratepayers.

The cost overruns are related to project delays, keeping workers on site for longer periods, the need to train workers more extensively than expected, and adding more supervisors on site for quality control.

Despite the issues, Georgia Power spokesman Mark Williams maintains the two new reactors will prove to be a good deal for customers.

“This project still represents $4 billion in economic value for our customers over the life of the units over any available alternative.”

Williams says Georgia Power customers will be asked to cover the new costs – something consumer and environmental groups are already railing against.

“The assumption that this is the cheapest option gets more and more unlikely,” said Sara Barzack, who has been tracking the project for the Southern Alliance for Clean Energy. “There are rocky waters already  happening and I think it’s highly arrogant of Georgia Power to think that it could not spiral out of control more.”

Meanwhile, the revised total cost does not include about a billion dollars of separate overruns currently in litigation. It’s why Barzack wants state regulators to consider scrapping the project.

“We’re now seeing the difficulties that’s entailed with building a first-of-its-kind reactor in the United States and it’s probably just going to get worse.”

Ultimately, the Georgia Public Service Commission will decide whether ratepayers or the company should absorb any costs beyond the originally approved price tag.

Commission Chairman Chuck Eaton says everything will be scrutinized.

“As an elected official, as a Georgia ratepayer, as somebody that looks out for the ratepayers, we’re very concerned about it, but it’s an initial filing, there’s going to be extensive hearings on it, it will be a highly transparent process.”

Those hearings, which are open to the public, will be held over the next several months. The PSC will make a decision this summer.