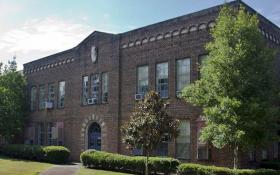 The arts organization WonderRoot has announced a significant expansion. The nonprofit arts and service organization has occupied its current space, a 4,000-square-foot house on Memorial Drive, since 2008.

Next year, it plans to move across the street into the 52,000 square-foot building that was formerly Tech High Charter School. The group plans to call the new space the WonderRoots Center for Arts and Social Change.Interview with WonderRoot executive director Chris Appleton that aired Tuesday, August 12, 2014

Last night, the Atlanta Public Schools Board of Education voted to permit the nonprofit arts and service organization to re-purpose the building under a 20-year lease.

WonderRoot executive direction Chris Appleton told WABE that the new space will allow the nonprofit to significantly expand what it does. The group plans to use about half the new space to runs its programming. It will lease the other half out to individual artists. There are plans for a recording studio, darkroom, digital media lab, printmaking studio, ceramic studio, and dance rehearsal studio. The group is also planning a performance hall, art gallery, cafe, education space, and community event space.

When asked the reasons for the move, Appleton says the group has simply outgrown its original building in a number of ways. “There’s more demand on the space than the square footage allows.” He also says the WonderRoot brand has outgrown the old purple house’s charm. “When people participate in WonderRoot programs outside of the arts center, and then come to the building, the two stories don’t necessarily match up anymore.”

Appleton says the expansion will also help allow the organization to evolve its working model. Since its founding in 2004, the group has received about 75% of its income from contributed dollars. With the renovation, the group hopes to change that, getting most of its dollars from artists renting its new arts spaces. The group also plans to expand its staff from the current eight to about 16 employees.

WonderRoot estimates the costs for renovation of the 92-year-old high school will approach three million dollars. Following a fundraising campaign and renovations, the WonderRoot Center for Arts and Social Change plans to open its doors in 2015.