Colorful umbrellas clashed on the lawn outside the National Center for Civil and Human Rights downtown Tuesday evening, as Atlantans gathered despite the drizzle. As the rain slowed and the clock inched toward 7, a singing chorus wrapped up its soft version of “I Am Light” and the umbrellas clicked close. Hundreds of bodies turned toward the stage, where Rabbi Joshua Lesser of Congregation Bet Haverim, an LGBT-founded Jewish community in Atlanta, took the microphone.

Lesser, the emcee for the “We Are Orlando” vigil honoring the victims of the recent mass shooting, opened the evening with the statement: “I believe in love. I believe in love, even when God is silent.”

He and more than 20 other speakers expanded from this statement over the next two hours as local religious, LGBTQ and other minority leaders addressed the massacre of 49 individuals, and wounding of over 50 others, at the Pulse nightclub in Orlando, Florida, early Sunday morning.

The gunman, Omar Mateen, was an American-born Muslim, and he had targeted the gay nightclub on its “Latin Night.” Mateen was killed at the scene by police, and local hospitals were flooded with the wounded victims.

Mateen had said in a 911 call during the attack that he claimed allegiance to the Islamic State, although investigators have said his allegiance appears to be conflicting. Recent reports have indicated that Mateen had frequented Pulse and had been active on gay dating apps, while his father has said Mateen had previously become angry at the sight of men kissing.

The unclear narrative of the deadliest mass shooting in modern U.S. history has since sparked heated discussion in politics about gun control, “radical Islam” and other issues. Since the massacre, vigils have been held in cities around the country — and around the world — including multiple ones in Atlanta. The rainbow has been a prominent theme at these vigils in support of the worldwide lesbian, gay, bisexual and transgender community, which has been mourning the attack as an episode of violence against people for their sexual preference or gender identity. 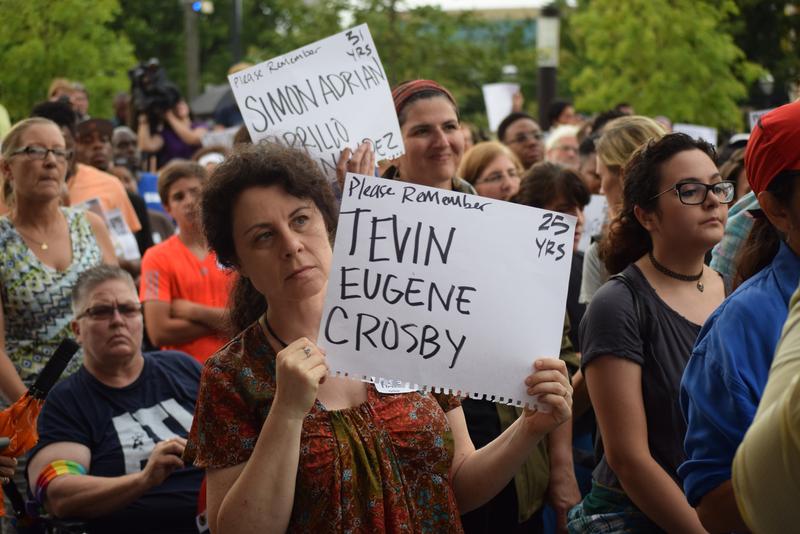 Tuesday’s event, which was hosted by the LGBT Institute at the Center for Civil and Human Rights, was a tri-lingual event. Speakers from Derrek Kayongo, the center’s CEO, to Simone Bell, former state legislator and current regional director of Lambda Legal, paused their speeches to allow onstage translators to convert their lines into Spanish. Other speakers, like Estrella Sanz with the Georgia chapter of the National TransLatina Coalition, had their talks translated into English. While the speeches pulsed between English and Spanish, an interpreter translated the event into sign language.

After a blessing from the Rev. Josh Noblitt of Saint Mark United Methodist Church in Midtown, leaders from local LGBT and Latino groups read the names of the victims. Members of the crowd held up white sheets of paper with those names, and some sketches of the deceased, written in black Sharpie.

Onstage, an organizer waved a photo of each of the victims as their respective names were called — some studio portraits, some goofy pictures and some selfies. The list ended as a photo of 18-year-old Akyra Monet Murray in her white high school graduation gown was held aloft.

After a group song and moment of silence, Jeff Graham of Georgia Equality spoke, saying he had been asked “to provide greetings from some of the elected officials in attendance tonight who do stand with the LGBT community,” including Fulton County Commission Chairman John Eaves, state Rep. Park Cannon and a representative of Atlanta Mayor Kasim Reed.

Local Muslim leaders spoke about their solidarity with the LGBT community, and local imam Plemon El Amin brought attention to the center’s water sculpture looming above the crowd, which is engraved with two quotes:

“Never doubt that a small group of thoughtful, committed citizens can change the world,” from anthropologist Margaret Mead; and

“To be free is to not merely cast off one’s chains, but to live in a way that respects and enhances the freedom of others,” from activist and former South African President Nelson Mandela.

Under the shadow of these quotes, the event ended with a “simple” call to action: to “love courageously.” 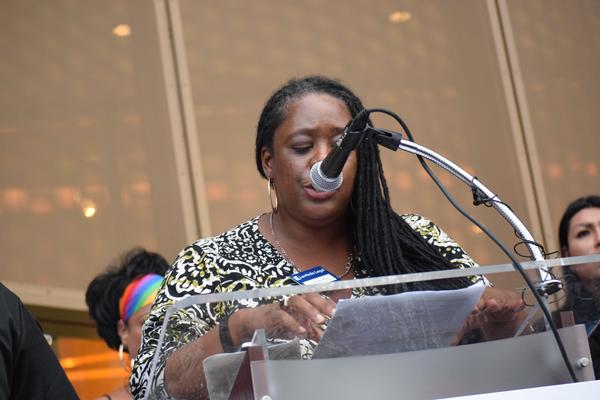 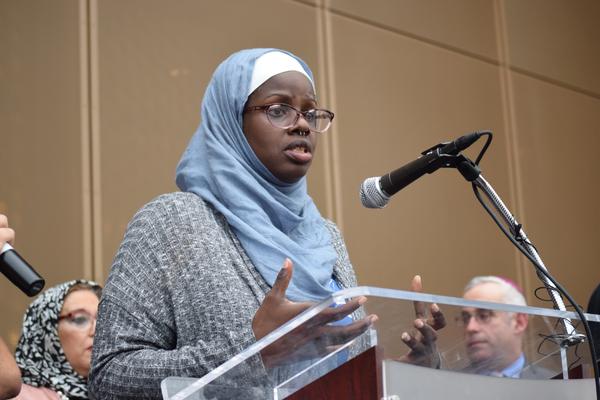 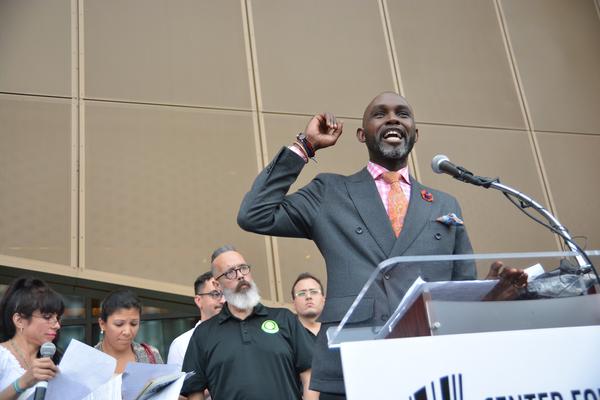