A controversial state Senate bill cleared its first hurdle Monday. The legislation would require private insurers to provide autism treatment coverage for children who are six and younger.

Judith Ursitti has two children with autism.  She’s also an advocate with Autism Speaks. Ursitti told the Senate Insurance and Labor Committee it’s heartbreaking to hear a pediatrician prescribe things like speech and behavioral therapy for your toddler only to find out they’re not covered by your insurance. 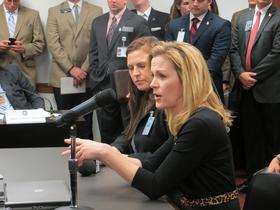 “It’s really shocking, I can tell you personally, to know that because your child has been diagnosed with a brain-based disorder, like autism spectrum disorder, they’re denied,” she said.

The committee also heard from those who oppose the bill. Kyle Jackson is the state director of the National Federation of Independent Business. He says it would place a significant burden on small businesses and force some to not offer health insurance.

“I just encourage you to think about the small businesses in your community and their ability to absorb extra cost,” Jackson said.

The plan also is opposed by the Georgia Chamber and the Georgia Association of Health Plans. The Georgia Association of Health Plans says it wants to see the outcome of a pilot project, which makes the treatment coverage available to state employees who participate in the State Health Benefit Plan. Others in the insurance industry say a portion of the bill would violate the Affordable Care Act. But advocates disagree and say the legislation is based on a law that passed in Virginia, which gained approval after the healthcare law went into effect.

But in the end, the committee unanimously approved the bill. Those who favor it say early treatment would reduce state costs, because it’s twice as expensive to put a child in a special education classroom versus a normal one.

The bill now goes before the full Senate, where’s it’s likely to pass. But the legislation is expected to face trouble in the House, where Speaker David Ralston has already expressed concerns about the cost to businesses. Last year, the bill failed after being combined with a bill to legalize the use of cannabis oil for those with seizure disorders.

Under the legislation, insurance companies could limit coverage for applied behavior analysis per child to $35,000.00 a year. Individual employers could also choose not to participate if the costs they pay for the treatment coverage rises by more than 1 percent annually. More than 30 states have passed autism treatment coverage legislation.