The sex trafficking of minors placed Georgia in the national spotlight after a FBI lists of cities with a high incidence of the crime included Atlanta.

Since then, there’s been a collective effort among advocates, lawmakers, survivors and others to combat sex trafficking. 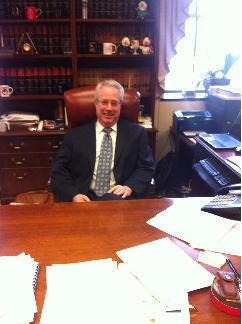 Part 1 broadcast version of this story.

Olens calls himself a newbie in the fight against sex trafficking.

“It’s been my honor to assist them, but it’s also what we’re supposed to do to protect those that have no one looking out for them.”

And he was the first Jewish candidate to win a statewide, partisan race in Georgia.

His job as the state’s lawyer is to defend Georgia statutes and that includes laws on highly debated issues such as the death penalty.

So couple that with combating any form of trafficking and Sam Olens will tell you he’s not just performing his elected duties.

“My mom died when I was five, my dad died when I was twelve and then lived with my aunt and uncle. My uncle died about a year later, I have two siblings, which I think teaches you a lot about the need to give back.”

For Olens that also means making sure the state’s laws involving sex trafficking are some of the toughest in the country.

Young victims of sex trafficking come from all areas of the state; some are runaways and often says Olens are from awful foster homes.

And some are exploited by their own parents.

“Shortly after the bill passed in the house when we were still having some resistance, there was news of an arrest in Dodge County involving a family that was monthly providing their 14-year-old daughter  to the used car lot dealer who was 66 in return for the monthly payment. “

The couple provided the teen for sex and photographs.

Olens says that was really telling to the legislature, not only because it was rural Georgia, but it was parents. “One of the more interesting things about sex trafficking, is there  is no common fact pattern,” says Olens.

The parents of the girl, Sandra and James Davis plead guilty to the charges against them, as did the car dealer, Robert Wayne Bearden.

Cases like this demonstrate that it will take a collective effort to prosecute buyers and sellers of sex with minors.

And while the conversation maybe uncomfortable for some, Sam Olens admits unawareness about the issue from any Georgian is unacceptable.

Part 2 broadcast version of this story.