It’s big business and it keeps Atlanta among the top cities for criminal activity related to sex trafficking.

A new national report indicates that in one year, the underground commercial sex economy brought nearly $290 million to metro Atlanta.

The U.S. Department of Justice funded the report.

This report from the Urban Institute is about money.

For the first time a comprehensive report details how structured and organized the underground sex economy was from 2003 to 2007.

The state capital of Georgia, says Meredith Dank, “is viewed as a source, transit and destination city.”

Dank is a senior research associate at the Urban Institute. 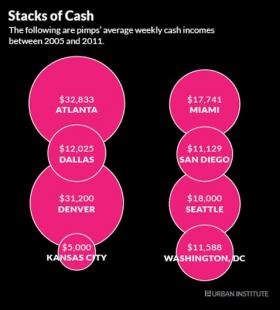 Dank says it took three years to gather the data and an additional year to compile the report.

They spoke with convicted pimps, sex workers and sex traffickers among others.

“We kind of let them guide the conversation. We had them explain what their local markets looked like and what the different venues were in those local markets.”

Prostitution there is extremely profitable and prices ranges from $50 to $150 [depending on the request].

It’s higher when services are arranged over the internet.

For example, the report quotes a law enforcement official as saying, “the younger the girl, the higher the price.”

Dank says street levels pimps have become smarter and are using technology for their business.

“Lot of times they’re coming over and they’re being smuggled. In the case of China, what law enforcement told us, a typical smuggling fee was about fifty to seventy thousand dollar, where a woman coming from Mexico it typical is about five to seven thousand dollars.”

The Urban Institute doesn’t say where most of the Latino Brothels are located.

But, the report does say they’re operated out of rented apartments and in back rooms of cantina dance clubs.

The Urban Institute enlisted the help of a mathematician and economist to measure the economic activity.

WABE sent the data to Atlanta based researcher Alex Trouteaud with the Anderson Family Foundation.

Trouteaud has spent a lot of time evaluating data related to sex trafficking.

He calls the report scientifically sound.

“What they really did is looked at the total amount of cash circulation in these metro markets.  And they basically worked from a standpoint of ruling out all other forms of explanation for why that cash is circulating until the only thing that is left is illegal cash circulation.” 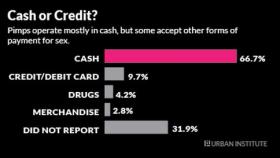 The organization works to prevent sex trafficking through early intervention and education.

She also reviewed the report.

“What I was struck with was how little we’ve done here in Atlanta on either brothels or massage parlors. We have primarily focused our attention on street and online places. I saw that map of all the different massage parlors and I thought, man, we’ve done nothing about massage parlor regulations.”

So while the report was eye-opening in that area, McCullough says it also means metro Atlanta needs a stronger collective to combat the underground commercial sex trade.

That won’t be easy, says Meredith Dank with the Urban Institute.

“Almost every single law enforcement we interviewed said, we are just scratching the surface.”

All total, 18 individuals within law enforcement were interviewed.