Audio version of this story

Security concerns forced Stone Mountain to shut down its amusement park Saturday during a “Rock Stone Mountain” rally self-described as “pro-white.” Nine counter-protesters were arrested: one for throwing a smoke bomb, and the others detained on misdemeanors like wearing masks and obstructing justice.

By midday Saturday, counter-protesters had picked their way through the woods. They made it around security and some were throwing fireworks. Others threw rocks – big ones.

“Do I think that’s right? No,” said Khalid Kamau, an organizer with Black Lives Matter. Like most of the protesters, he was not throwing anything. “But do I understand the frustration of people who see state troopers and SWAT teams out here supporting and protecting white supremacists who have been given a permit to rally in a state park?”

Georgia State Patrol, the GBI, the state departments of corrections, park rangers and the DeKalb County Sheriff’s office were all called up. Several hundred officers were bussed in. Many stood guard, neatly spaced out in riot gear, protecting two dozen pro-white ralliers.

“I had an anxiety attack a few weeks back, because I watch too much news,” Andrews said. “Doctor said ‘stop watching the news.’ All I see is murder. Black Lives Matter did this, University of Missouri – all these things are happening and we’re just standing back saying nothing. So now we’re standing up.”

Behind him, on an iron fence was a banner that read “Diversity = White Genocide.” 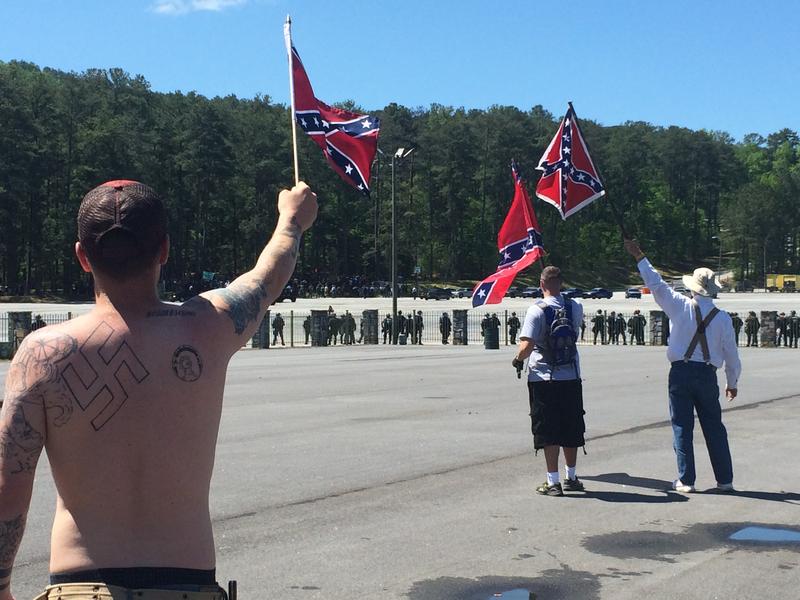 Elsewhere in the park, a separate faction of pro-confederate ralliers was trying to distance the rebel flag from racial controversy, leaning on the concept “heritage not hate.”

Confederate rallies are nothing new to Georgia or the region, says Charles Bullock, a political science professor at the University of Georgia.

“I don’t see this as being part of a larger movement,” said Bullock. He said Georgia has mostly surpassed the turmoil of 1960s civil rights struggles. “I think it’s one of those idiosyncratic things that happens.

“Because we have moved so far beyond that, that for an organization to announce that it is a white supremacy rally is odd is strange, and I guess that makes it newsworthy.”

He says Gov. Nathan Deal has taken pains to distinguish Georgia as business-friendly and welcoming of difference.

Deal’s veto of the religious exemptions bill was seen by many as a public relations win for the state, said Bullock. But pro-white demonstrations?

“It’s not what the chamber of commerce or the state would like to show the world,” he said.

“I don’t think that there’s any question that we are seeing a growth of the radical right in general and the – in particular – the ideas of white supremacy or white nationalism,” Potok said

In the six months following the massacre in Charleston, the SPLC tracked more than 350 pro-Confederate flag rallies nationally. Though, like in Stone Mountain, turnout often mediocre, Potok said appearances can be misleading.

“I think there are huge numbers of Americans who think groups like the KKK are an artifact of the past and they have no role at all in our society today, and that is wrong. It’s true that the Klan per se is small and weak and uninfluential,” said Potok.

He explained that those extreme ideologies have gained strength, however, over the internet, media and broadcast talk shows. He said the flow of those ideas do play out “on the ground.”

He said incidents of domestic and extremist violence are on the upswing since 2008.

Patrick Ayelle’s car was stuck. He came to exercise, and said he doesn’t support white-supremacists, but the counter protesters’ tactics were violating his own rights.

“I don’t care! Leave me alone. Do your Klan thing, do your whatever thing, protest. I want to work out. Please,” Ayelle said.

These counter-protesters said Stone Mountain should stop issuing permits to what they call racist groups.

But John Bankhead with the park police said it’s a First Amendment issue:

“We tried. We reached out to try to find a way to stop it, but legally we can’t, and a lot of people don’t understand that.

Bankhead was tired. He’d gotten hit in the foot by a protester’s rock.

“We don’t want these things to happen anymore here,” he said. “We’ve had enough of this. We’re sick of it. We wish they’d take their rallies and just go some other place.”

There was no laser show at Stone Mountain that night. By Sunday, the park was back to normal.