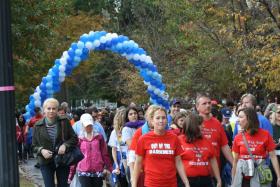 That’s among the messages the Metro Atlanta Chapter of the American Foundation for Suicide Prevention hopes to deliver at its 10th annual Out of the Darkness Walk at Piedmont Park Sunday afternoon.

The organization says there are more than 1,000 suicides per year in Georgia, which makes suicide rates higher than homicide rates.

“Ninety percent of people who die by suicide have a diagnosable, treatable mental disorder at the time of their death,” says Anna Ruth Williams, a board chair for the group.

Georgia isn’t the only state seeing a rise in suicides.  Rates of self-inflicted deaths have risen nationally since the middle of the last decade.

“It’s certainly possible that the impact of the recession might have contributed to these numbers, but there are so many other issues at play as well,” says Dr. Jeffrey Rakofsky, an assistant professor at Emory University.

He says they include negative opinions toward anti-depressants, severe stress and a lack of communication with family and friends.

The AFSP expected more than 1,000 people will attend Sunday’s walk.