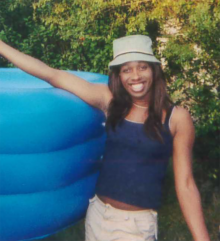 Ashley Diamond has been released to family members from Augusta State Medical Prison.

As of Monday morning, she’s under parole supervision, according to the Georgia State Board of Pardons and Paroles.

Diamond, a transgender woman, sued the Georgia Department of Corrections in February after being denied hormone therapy and facing repeated assaults in men’s prison facilities where she was housed. Her case drew the attention of the U.S. Department of Justice who said the failure to provide individualized medical treatment for Diamond violated the Eighth Amendment’s prohibition of cruel and unusual punishment.

Diamond, 37,  began serving an 11-year sentence in November 2012 for burglary, theft and other charges. She had received hormone treatments since age 17, up until she was incarcerated.

The Georgia Department of Corrections officially changed its hormone treatment policy for transgender inmates in April.

Offenders with a possible diagnosis of Gender Dysphoria, including offenders who assert they have Gender Dysphoria, will receive thorough medical and mental health evaluations from appropriately licensed and qualified medical and mental health professionals. The evaluation will include an assessment of the offender’s treatment and life experiences prior to incarceration as well as experiences during incarceration (including hormone therapy, completed or in-process surgical interventions, real life experience consistent with the offender’s gender identity, private expressions that conform to the preferred gender and counseling).

If a diagnosis of Gender Dysphoria is reached, a treatment plan will be developed that promotes the physical and mental health of the patient. The development of the treatment plan is not solely dependent on services provided or the offender’s life experiences prior to incarceration. Treatment plans will be reviewed regularly and updated as necessary. Current, accepted standards of care will be used as a reference for developing the treatment plan.

Before then, the agency allowed inmates only the same level of treatment they’d received when they entered a corrections facility.

According to recent court filings by the Southern Poverty Law Center, who sued the Georgia Department of Corrections on Diamond’s behalf, the dosage she’s since begun receiving remained inadequate for months. They also say despite the official policy change, transgender inmates continue to be denied satisfactory medical care.

The lawsuit also alleges Diamond has continued to face assaults as recently as June, when lawyers say she was placed in a cell with a sex offender.

The Southern Poverty Law Center says it will continue to pursue the case against Georgia corrections for damages.

State officials have not said specifically why Diamond was released.  However, a spokesman for the Board of Pardons and Paroles did provide a statement that said as follows:

The Board has the constitutional authority to release an offender on parole when it has determined the release is compatible with the welfare of society and public safety as was the case with this offender.

The board has a comprehensive case file on each offender. We investigate the case and the history including the criminal history of the inmate. The Board Members study the case file and make a decision whether to grant or deny parole and if to grant how much of the sentence the inmate should serve before being paroled.