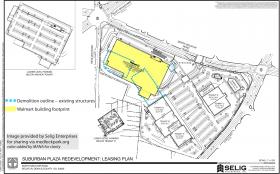 A citizens group has been fighting for two years to keep a Walmart from being built in DeKalb County’s Suburban Plaza. With that battle now in court, Walmart’s Director of Communications spoke with WABE News.

Good Growth DeKalb’s court battle is technically against DeKalb County, but the goal is to stop developer Selig Enterprises from building the Walmart. The group says its survey last year indicated 75% of people who live nearby oppose the store.

Walmart has long contended that Good Growth DeKalb does not represent the community’s true opinion. According to Walmart’s Bill Wertz, “We have not done any empirical studies. I don’t know where their 75% figure is coming from. All I can tell you is that the community input both the developer and Walmart have received tells us that there is strong and broad community support.”

In response, Good Growth DeKalb spokesperson Louise Runyon told WABE, “It’s just easy to say something, but they have no back-up. It’s the big lie technique: ‘I will say it; therefore it is true.’ And that’s just not how it works.”

Responding to complaints from people who live near other Walmart stores who claim the retail chain did not honor promises it made before construction, Wertz told WABE, “We will meet our commitments to the neighborhood.  What we have said that we would do, we will follow through and make sure that that happens.”

A court ruling on Good Growth DeKalb’s suit against the county could come next month. Runyon says the organization will continue to fight against the planned construction in Suburban Plaza. The group’s complaint is that the six-point intersection at North Decatur Road, Medlock Road, and Scott Boulevard cannot handle the traffic the Walmart would generate.