A statewide campaign is being introduced by Georgia Attorney General Sam Olens.

It’s the first time a united front will target the demand side of child sex trafficking.

As he stood to announce the campaign, Georgia Attorney General Sam Olens was flanked by federal, state and local law agencies, state lawmakers and advocates. 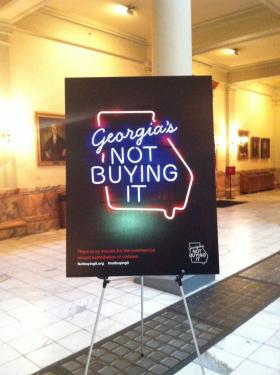 “We stand here today to proclaim that people who purchase children for sex are criminals too. I’m proud to announce the launch of a new state wide campaign entitled ‘Georgia’s Not Buying It’, which will specifically target the demand side of sex trafficking.”

That includes going after those that come to Georgia looking to purchase sex from minors.

“But we know that the only way to truly eradicate this evil is by ending the demand. So with this campaign, we’re sending a message to those that purchase children for sex, your secret is out and we will no longer stand for such activity.”

There was a time when talking about sex trafficking and children were taboo.

Lawmakers like Renee Untermann were alone in the fight, but times have changed, says the lone female state Republican senator.

“So we have made absolutely remarkable steps. We are now educating law enforcement across the state of Georgia. We are educating judges prosecutors, the education establishment with teachers and principals…”

The faith based organization works with other community partners to stop the commercial sexual exploitation of children (CSEC) in Metro Atlanta.

“We need to be the dads that pour into our sons, respect women, don’t use them. There’s enough of this false masculinity going around that somehow this makes you more of a man when actually it makes you less of one.”