Atlanta’s Jewish leaders and members of their congregations came together to talk about child sex trafficking.

It’s part of the Open Jewish Project dedicated to educating and empowering Jews to be proactive about the issue.{description}

Hundreds packed inside a meeting hall at The Temple, Atlanta’s oldest synagogue.

Jennifer Swain is the program manager for A Future, Not a Past campaign which helps victims of child sex trafficking.

She told the crowd each month seventy-two hundred men in Georgia knowingly or unknowingly purchase sex with a minor. 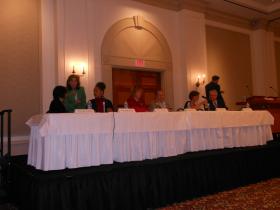 Sounds of shock and disbelief could be heard from the audience.

“I believe that the Jewish community has been silent because we didn’t know but now we know and have to act.”

“That was the part that really hurts me the most. I am Jewish. The reason I came out today is because I’m not that involved in the Jewish community I would say but this is something I really believe in. As a Jewish community member I wanted to be a part of this movement.”

“Our whole philosophy is based on a line that we read every year at Passover that says, once we were slaves in Egypt and now we are free and we have an obligation to end slavery wherever and whenever it rears its ugly head.”

This was the first time in the country that a sex trafficking forum solely addressed the Jewish community.

Rabbi Rachael Bregman is hopeful it will inspire other Jews to connect with the organizations working to combat child sex trafficking.

“There are a hundred and thirty thousand Jews in Atlanta and we are working to educate all of them.  So, this is just one drop in a very large bucket but it’s a start.”